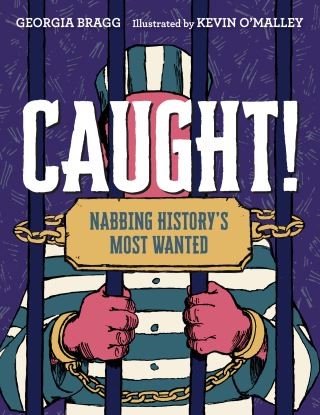 A humorous look at how famous people got caught, including Joan of Arc, Blackbeard, Al Capone, and more! From the award-winning team that brought you How They Croaked and How They Choked.

Outlaw, assassin, art thief, and spy, these fourteen troublemakers and crooks--including Blackbeard the pirate, Typhoid Mary, and gangster Al Capone--have given the good guys a run for their money throughout the ages.

Some were crooked, some were deadly, and some were merely out of line--but they all got Caught! as detailed in this fascinating and funny study of crime, culture, and forensic science.

Georgia Bragg: Georgia Bragg is the author of the award-winning How They Croaked and How They Choked, as well as Matisse on the Loose, a middle-grade novel. Before becoming a writer, Georgia was an artist, printmaker, and script supervisor. She has two grown children. Georgia lives in Los Angeles with her husband and two cats. Visit her at georgiabragg.com.