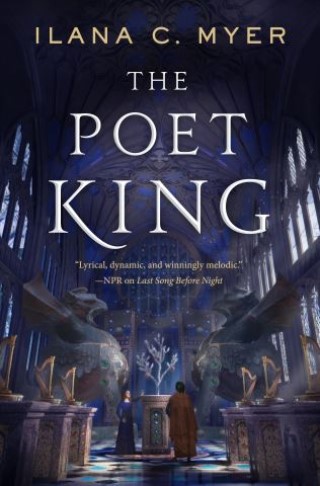 The Harp and Ring Sequence #3

Prophecies unfold, legends turn real, and a war of mythical proportions endangers the realm in Ilana C. Myer’s epic fantasy The Poet King, the follow-up to her critically-acclaimed Fire Dance, continuing The Harp and Ring Sequence.

After a surprising upheaval, the nation of Tamryllin has a new ruler: Elissan Diar, who proclaims himself the first Poet King. Not all in court is happy with this regime change, as Rianna secretly schemes against him while she investigates a mysterious weapon he hides in the bowels of the palace.

Meanwhile, a civil war rages in a distant land, and former Court Poet Lin Amaristoth gathers allies old and new to return to Tamryllin in time to stop the coronation. For the Poet King’s ascension is connected with a darker, more sinister prophecy which threatens to unleash a battle out of legend unless Lin and her friends can stop it.

Ilana C. Myer: ILANA C. MYER was a freelance journalist based in Jerusalem and cultural critic for various publications. As Ilana Teitelbum she has written book reviews and critical essays for The Globe and Mail, the Los Angeles Review of Books, Salon, and Huffington Post. Her series, The Harp and Ring Sequence, includes Last Song Before Night, Fire Dance, and The Poet King. A native New Yorker and longtime Jerusalem resident, she now resides in the mountains of Pennsylvania.