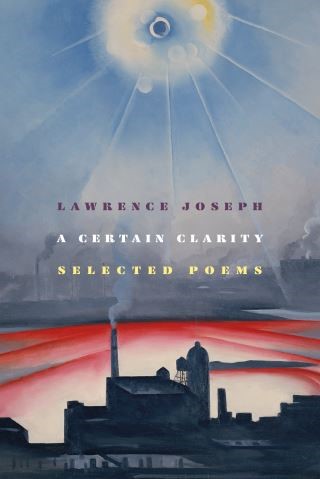 A selection of poems from the celebrated poet and lawyer

Drawing from his first book, Shouting at No One, from 1983, and continuing through to his most recent, So Where Are We?, from 2017, A Certain Clarity provides a generous selection of Lawrence Joseph’s "poetry of great dignity, grace, and unrelenting persuasiveness” (John Ashbery), each poem “an inspired, made thing by a poet-advocate who has honed a timely song within an urgent testimony that embraces the complex density of truth” (Yusef Komunyakaa).

Joseph’s poems constitute one of the most essential and visionary bodies of work in contemporary American poetry. No other American poet covers the territory Joseph does. His ever-new interactions of thoughts, voices, and languages—influenced by his Lebanese and Syrian Catholic heritage, his professional life as a lawyer and legal scholar, and the economies of the world of working-class labor from which he comes—bear witness, on multilayered spatial and temporal planes, to the velocities of global and historical change, and to power structures embodied in endless wars, unleashed capital, racism, and ecological destruction, presenting an ongoing chronicle of what it means to write poetry in the turbulent times in which we live. But also integral to Joseph’s poetry is a sensual intimacy, passionately driven by an acute awareness of a deeper order in which beauty, love, and justice are indistinguishable.

Meticulously formed, emotionally fierce, intellectually challenging, Joseph’s poems press back against the high-stakes pressures of our time with a moral and aesthetic intensity not easily forgotten.

Lawrence Joseph: Lawrence Joseph, the grandson of Lebanese and Syrian Catholic immigrants, was born and raised in Detroit. A graduate of the University of Michigan, University of Cambridge, and University of Michigan Law School, he is the author of several books of poetry, including So Where Are We?, and of the books of prose, Lawyerland, a non-fiction novel, and The Game Changed: Essays and Other Prose. He is the Tinnelly Professor of Law at St. John’s University School of Law and has also taught creative writing at Princeton. He is married to the painter Nancy Van Goethem and lives in New York City.