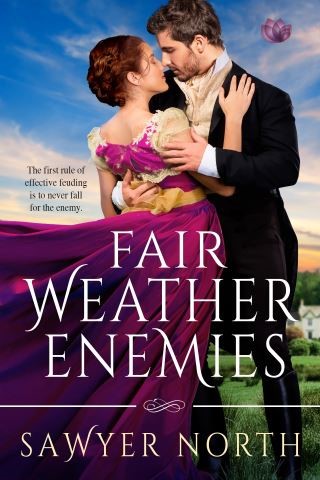 The Hancocks and Ashfords have had a long-standing feud between their families long before Miss Jane Hancock couldn't stand the sight of gentleman farmer Adam Ashford. But after both families fall on hard times and an unscrupulous creditor forces Jane and Adam to sign a devil's bargain, they'll finally understand the true meaning of keeping your enemies close at hand.

The terms of this bargain? Locate a lost treasure shrouded in deception and mystery.

The catch? Only one can claim it to win...the loser is left to ruin.

As Jane and Adam embark on a trek throughout England they plan to hate their adversary, no matter how attractive, generous, and kind they are.

Sawyer North: After self-publishing science fiction novels over a period of years, I made the truly odd move into historical romance. Although romance is a strong thread in nearly all my works, I came to straight-up, nothing-but-romance only after turning fifty. Since then, I am plagued by the question, “What took me so long?” My awakening began rather innocuously when I casually watched the 2015 version of Poldark. Before I knew, I was falling headlong into the abyss of historical romance and read fifteen such novels over a three-month span. However, no number could sufficiently scratch my itch for more, so I did what any writer would do and began constructing stories of my own. In April of 2019, I received my first contract with Entangled Publishing. Now, I will see how deep the rabbit hole goes.