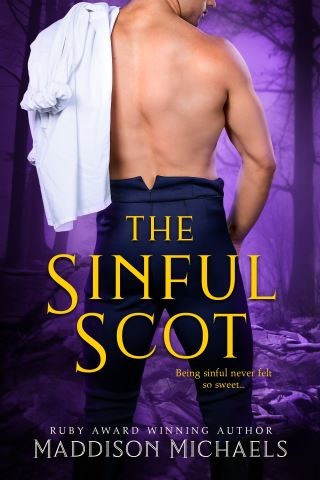 Constance Campbell, the Duchess of Kilmaine, once believed that all she needed in life was a duke. But everything unraveled when she realized her perfect husband was a perfect monster. Now broken beyond repair, she hides her misery behind a perfect Society mask...even from her childhood friend, Alec.

Dr. Alec McGuiness reluctantly finds himself back in Scotland, and checking up on the only woman to ever get under his skin, Connie. After she spurned him many years ago, he knows his humble life as a doctor could never be enough for her. But when the Duke of Kilmaine is murdered in cold blood, with Connie sleeping right next to him in bed, Alec knows he must protect Connie at all costs from those who would frame her for the duke’s murder.

Now on the run, Connie feels a freedom she only ever dreamed about, and an unexpected attraction to the man who is keeping her safe. But even if they can win her freedom and clear her name, could she ever open her heart up to someone again?

Each book in the Saints & Scoundrels series is STANDALONE:
* The Devilish Duke
* The Elusive Earl
* The Sinful Scot

Indoctrinated into a world of dashing rogues and feisty heroines when she was a teenager, Maddison Michaels is a bestselling, award-winning Australian romance author who loves to write sexy history with a dash of mystery! Her debut novel, The Devilish Duke, won the 2019 Romance Writers of Australia Historical Romance Book of the Year. Maddison lives in Sydney with her gorgeous hubby and daughter and always starts her day with a cup of liquid gold...coffee (just quietly, she’s addicted to the stuff)!

Maddison loves hearing from her readers and can be found on the following social media platforms:
Facebook: facebook.com/MaddisonMichaelsAuthor
Instagram: instagram.com/maddisonmichaelsauthor/
Bookbub: bookbub.com/authors/maddison-michaels http://maddisonmichaels.com/