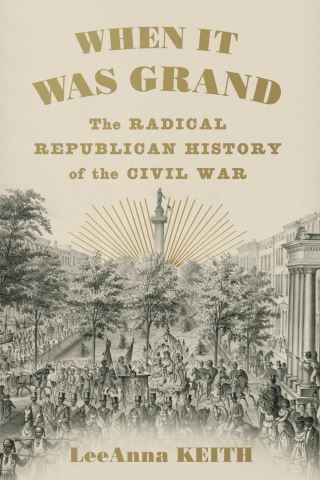 When It Was Grand

The Radical Republican History of the Civil War

Garrison’s simple statement expresses the essential truths at the heart of LeeAnna Keith’s When It Was Grand. Here is the full story, dramatically told, of the Radical Republicans—the champions of abolition who helped found a new political party and turn it toward the extirpation of slavery. Keith introduces us to the idealistic Massachusetts preachers and philanthropists, rugged Midwestern politicians, and African American activists who collaborated to protect escaped slaves from their captors, to create and defend black military regiments and win the contest for the soul of their party. Keith’s fast-paced, deeply researched narrative gives us new perspective on figures ranging from Ralph Waldo Emerson and John Brown, to the gruff antislavery general John Fremont and his astute wife, Jessie Benton Fremont, and the radicals’ sometime critic and sometime partner Abraham Lincoln.

In the 1850s and 1860s, a powerful faction of the Republican Party stood for a demanding ideal of racial justice—and insisted that their party and nation live up to it. Here is a colorful, definitive account of their indelible accomplishment.

LeeAnna Keith: LeeAnna Keith teaches history at the Collegiate School for Boys in New York City. She is the author of The Colfax Massacre: The Untold Story of Black Power, White Terror, and the Death of Reconstruction.