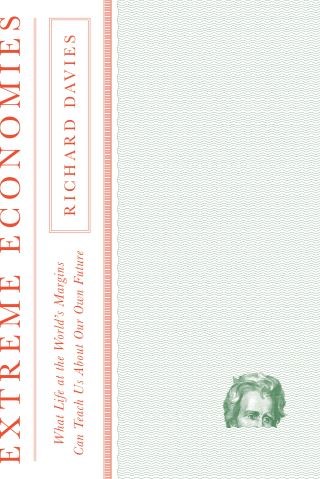 An accessible, story-driven look at the future of the global economy, written by a leading expert

To predict our future, we must look to the extremes. So argues the economist Richard Davies, who takes readers to the margins of the modern economy and beyond in his globe-trotting book. From a prison in rural Louisiana where inmates purchase drugs with prepaid cash cards to the poorest major city on earth, where residents buy clean water in plastic bags, from the world’s first digital state to a prefecture in Japan whose population is the oldest in the world, how these extreme economies function—most often well outside any official oversight—offers a glimpse of the forces that underlie human resilience, drive societies to failure, and will come to shape our collective future.

While the people who inhabit these places have long been dismissed or ignored, Extreme Economies revives a foundational idea from medical science to turn the logic of modern economics on its head, arguing that the outlier economies are the place to learn about our own future. Whether following Punjabi migrants through the lawless Panamanian jungle or visiting a day-care for the elderly modeled after a casino, Davies brings a storyteller’s eye to places where the economy has been destroyed, distorted, and even turbocharged. In adapting to circumstances that would be unimaginable to most of us, the people he encounters along the way have helped to pioneer the economic infrastructure of the future.

At once personal and keenly analytical, Extreme Economies is an epic travelogue for the age of global turbulence, shedding light on today’s most pressing economic questions.

Richard Davies: Richard Davies is a British economist and journalist. He is a fellow at the London School of Economics, and has served as economic adviser to the Chancellor of the Exchequer and Chair of the Council of Economic Advisers at HM Treasury. The author of Extreme Economies, he also served as the economics editor of The Economist.