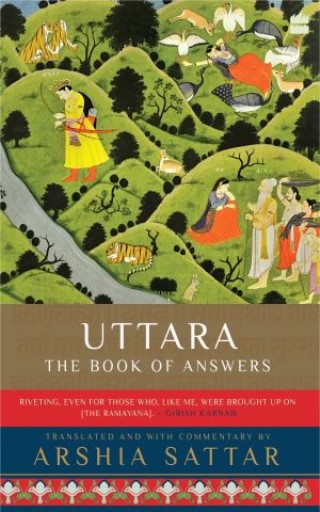 Uttara: The Book of Answers

Instead of being a tranquil denouement to a tale studded with dangerous adventure and emotional turbulence, Valmiki's Uttara Kanda is a shattering epilogue to a beloved story. Ravana has been defeated, and Rama and Sita have returned to Ayodhya. Rama is established on the throne that is rightfully his and spends his time listening to the stories that the sages tell him, which answer questions like: Why did Hanuman not know about his special powers? How is it that the mighty rakshasas were defeated by the monkeys? Why did Ravana never touch Sita when she was his prisoner? But these stories are punctuated by events such as the banishment of Sita and the killing of Shambuka. What is said and done in the Uttara Kanda forces us to reconsider the events of the Ramayana, urging us to read the epic through a new and disturbing lens.

ARSHIA SATTAR: Arshia Sattar holds a PhD in South Asian Languages and Civilizations from the University of Chicago. She teaches classical Indian literature at several institutions in India and writes for a number of journals and magazines.