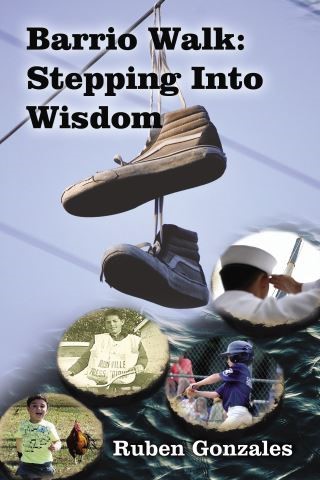 Barrio Walk: Stepping into Wisdom is about life during the late 1950's and beyond in Phoenix, AZ. It is a chronological sequence of the author's experiences that shows his simple life during his early school years. There is description of the multi-racial school environment and the interaction among students. He experiences the wrong end of a bullying incident on the school playground. He is devasted when none of his friends come to his aid. He spends his last two years of elementary at a small Catholic school.

His life changes after he is unexpectedly left in Los Angeles at the age of fourteen. His aging grandparents live in the middle of the rugged City Terrace barrio in East LA. He is homesick and has trouble dealing with a demanding grandmother showing early symptoms of Alzheimer's. He plans to ride his bicycle 440 miles back to Phoenix, when God changes his plan. He visits a seminary in Compton, CA and makes a hasty decision to become a priest. He spends his first two years of high school at Dominguez Seminary.

After he decides to quit his quest for the priesthood, the book describes the struggles of re-entering into a "normal" adolescence in the barrio of Phoenix. Most of his experiences are centered on working in a dysfunctional job environment at a nearby grocery store.

As the young man continues into his latter teenage years, he begins to change gradually for the worse. He discovers his fondness of alcohol that later becomes an addiction. His struggles continue as he tries to figure out his purpose in life. He is on the verge of getting into serious trouble with the law in various situations. These include underage drinking, almost getting caught in an attempt to steal a car battery and has an alcohol related motor vehicle accident. His life becomes more complicated as he adds a substance to enhance his drinking ability. His life is in a downward spiral. He is rescued from all of this when he escapes the barrio by joining the Navy.

The purpose of the book is to show others with similar beginnings what brought him to believe in the manner he currently does. It is not meant to say, "The way I believe is right, and you are wrong" or to put down anyone’s beliefs. The book is intended to encourage the reader to take a closer look at what they truly believe. Scripture is used to shine light on Jesus as the way to the Father. It is emphasized the way explicitly and not one of the ways to the Father.

Barrio Walk is a story of Hope interspersed with humor and scripture. The book shows glimpses of the future with the sharing of the author's born-again experience much later in life. The final chapter is one of triumph as it describes his father’s acceptance of Christ and his "jump" into Eternal life at his moment of death.

Ruben Gonzales is a late blooming writer who uses personal experiences and humor to inspire others. He is a Viet Nam veteran who served on the USS Gray DE-1054.

His MBA is from the University of Colorado; his undergraduate is from Arizona State University. During 39 years with USPS, he held several Postmaster positions and worked his way into the Executive ranks.

He currently resides near Austin, Texas with his wife.