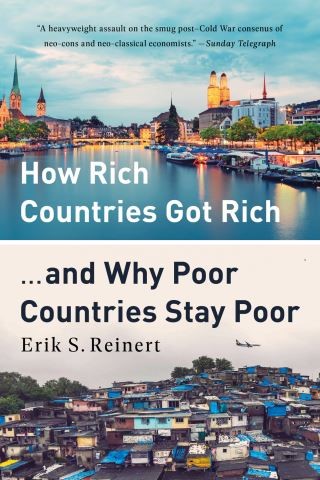 How Rich Countries Got Rich ... and Why Poor Countries Stay Poor

A maverick economist explains how protectionism makes nations rich, free trade keeps them poor---and how rich countries make sure to keep it that way.
Throughout history, some combination of government intervention, protectionism, and strategic investment has driven successful development everywhere from Renaissance Italy to the modern Far East. Yet despite the demonstrable success of this approach, development economists largely ignore it and insist instead on the importance of free trade. Somehow, the thing that made rich nations rich supposedly won't work on poor countries anymore.
Leading heterodox economist Erik Reinert's invigorating history of economic development shows how Western economies were founded on protectionism and state activism and only later promoted free trade, when it worked to their advantage. In the tug-of-war between the gospel of government intervention and free-market purists, the issue is not that one is more correct, but that the winning nation tends to favor whatever benefits them most.
As Western countries begin to sense that the rules of the game they set were rigged, Reinert's classic book gains new urgency. His unique and edifying approach to the history of economic development is critical reading for anyone who wants to understand how we got here and what to do next, especially now that we aren't so sure we'll be the winners anymore.