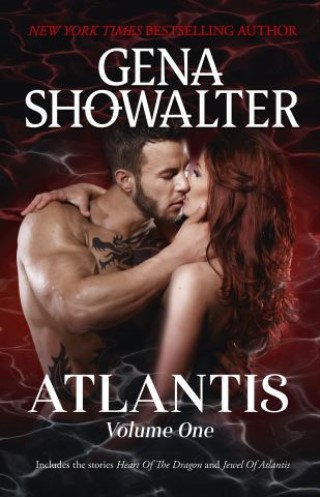 Before The Lords of the Underworld, there was Gena Showalter’s Atlantis series. Rediscover this mythical world of immortals, magic and dark seduction...

Heart Of The Dragon

Searching for her missing brother, Grace Carlyle never dreamed she would discover a secret world populated by mythological monsters - or find herself facing a sword-wielding being whose looks put mortal men to shame.

But there he was, Darius en Kragin, one of a race of shape-shifting warriors bound to guard the gates of Atlantis, and kill all travelers who strayed within its borders. Now Grace’s life was in his hands, and Darius had to choose between his centuries-old vow and the woman who had slipped beneath his defenses and stolen the heart of Atlantis’s fiercest dragon.

All Atlantis seeks the Jewel of Dunamis, which legend claims can overcome any enemy. Grayson James, human agent of the ultrasecret Otherworld Bureau of Investigation, has orders to keep it from the wrong hands - or destroy it. What he doesn’t know is that Jewel is a woman, not a stone! But once he meets this precious gem, destroying her is the last thing on his mind...

Jewel, part goddess, part prophet, needs Gray’s help to win her freedom. Gray needs her wisdom to navigate monster-ridden Atlantis. But need blossoms into passionate love as they battle demons, dragons and vampires - and fight for a future that seems impossible...

Gena Showalter: Gena Showalter is the New York Times and USA TODAY bestselling author of over fifty books, including the acclaimed Lords of the Underworld and Angels of the Dark series, and the White Rabbit Chronicles. She writes sizzling paranormal romance, heartwarming contemporary romance, and unputdownable young adult novels, and lives in Oklahoma City with her family and menagerie of dogs.