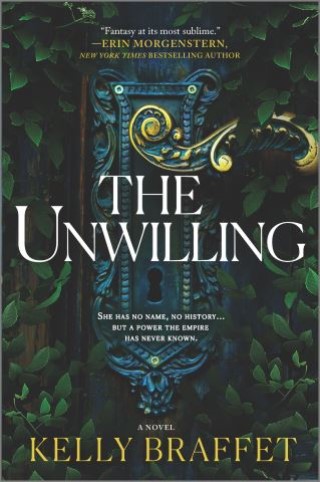 “Fantasy at its most sublime.”—Erin Morgenstern, NYT bestselling author of The Night Circus

A penetrating tale of magic, faith and pride…

The Unwilling is the story of Judah, a foundling born with a special gift and raised inside Highfall castle along with Gavin, the son and heir to Lord Elban’s vast empire. Judah and Gavin share an unnatural bond that is both the key to her survival…and possibly her undoing.

As Gavin is groomed for his future role, Judah comes to realize that she has no real position within the kingdom, in fact, no hope at all of ever traveling beyond its castle walls. Elban—a lord as mighty as he is cruel—has his own plans for her, for all of them. She is a mere pawn to him, and he will stop at nothing to get what he wants.

But outside the walls, in the starving, desperate city, a magus, a healer with his own secret power unlike anything Highfall has seen in years, is newly arrived from the provinces. He, too, has plans for the empire, and at the heart of those plans lies Judah… The girl who started life with no name and no history will soon uncover more to her story than she ever imagined.

An epic tale of greed and ambition, cruelty and love, this deeply immersive novel is about bowing to traditions and burning them down.

Kelly Braffet: Kelly Braffet is the author of the novels Save Yourself, Josie and Jack and Last Seen Leaving. Her writing has been published in the New York Times and Vulture.com, as well as The Fairy Tale Review, Post Road, and several anthologies. She attended Sarah Lawrence College and Columbia University and currently lives in upstate New York.