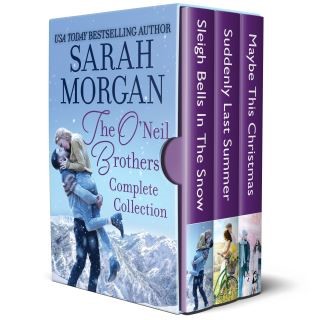 Sleigh Bells in the Snow

Once upon a time, Christmas was Kayla Green’s favorite time of year. Now all the workaholic wants for Christmas is for it to be over—as fast as possible! So when duty calls her to snowy Vermont to close a deal with a new client, Kayla is grateful for an excuse to avoid the holidays for another year.

Jackson O’Neil left a thriving business behind to return home and salvage his family’s resort—it’s in his blood, and he can’t let it fail. Now that he’s got marketing whiz Kayla Green working with him to put Snow Crystal on the map, success is on the horizon. The fact they strike enough sparks off each other to power all the Christmas lights in Vermont is just an added bonus.

Kayla might be an expert at her job, but she’s out of her depth with Jackson—he makes her crave the happy-ever-after she once dreamed of, and it’s terrifying. As the snowflakes continue to swirl, will the woman who doesn’t believe in the magic of Christmas finally fall under its spell?

Fiery French chef Elise Philippe is having a seriously bad day. Not only have the grand opening plans for her beloved café fallen apart, but Sean O’Neil is back in town and looking more delectable than ever. Memories of the electrifying night they shared last summer leave Elise very tempted, but she knows all too well that eventually Sean will be leaving…again.

Being back in Vermont—even temporarily—is surgeon Sean O’Neil’s worst nightmare. Returning home to the Snow Crystal Resort means confronting the guilt he feels about rejecting his family’s lifestyle years ago. But discovering that ƒlise is still in Vermont and still sets his blood racing is a very welcome distraction! Remembering last summer and how good they were together is going to make walking away more difficult than he could imagine….

This winter, ex-skiing champion, reformed heartbreaker and single dad Tyler O’Neil has only one mission—making sure his daughter, Jess, has the best Christmas ever. The fact that his best friend, Brenna, is also temporarily moving into his chalet at the overbooked Snow Crystal resort is a delicious distraction he’s simply going to have to ignore. Theirs is the one relationship he’s never ruined, and he’s not about to start now.

Ski pro Brenna Daniels knows all about the perils of unrequited love—she’s been in love with Tyler for years. But living with him is absolute torture… How can she concentrate on being his friend when he’s sleeping in the room next door? Then when Tyler kisses Brenna, suddenly the relationship she’s always dreamed of feels so close she could almost touch it. Could this be the Christmas her dreams of a happy-ever-after finally come true?

Romantic Times has described her as 'a magician with words' and nominated her books for their Reviewer's Choice Awards and their 'Top Pick' slot. In 2012 Sarah received the prestigious RITA® Award from the Romance Writers of America. She lives near London with her family. Find out more at www.sararahmorgan.co