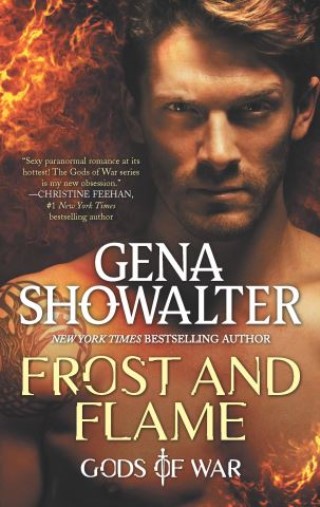 From Gena Showalter, the New York Times bestselling author of the Lords of the Underworld saga, comes Frost and Flame, the second book in the scorching paranormal romance series Gods of War.

Bane of Adwaeweth is the most feared immortal warrior in All War history. Possessed by a bloodthirsty beast, he will stop at nothing to win. Then he meets irresistible Nola Lee. He hates the power she wields over him, but she alone can rain vengeance upon his wife’s killer.

Unaware of her destiny to rule as queen of beasts, Nola battles illness, addiction and vulnerability. With Bane, however, she experiences pleasure for the first time, and only wants more. But being with him comes with a terrible price.

With enemies lurking around every corner, Bane and Nola must fight to survive. But time is running out, and neither can resist the sizzling attraction blazing between them. Will their romance save the beast and his beauty, or destroy everything they’ve come to love?

Gena Showalter: Gena Showalter is the New York Times and USA TODAY bestselling author of over seventy books, including the acclaimed Lords of the Underworld series, the Gods of War series, the White Rabbit Chronicles, and the Forest of Good and Evil series. She writes sizzling paranormal romance, heartwarming contemporary romance, and unputdownable young adult novels, and lives in Oklahoma City with her family and menagerie of dogs. Visit her at GenaShowalter.com.