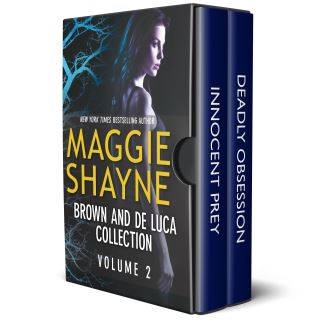 Available for the first time together in one volume, the final two stories in the Brown and De Luca series from New York Times bestselling author Maggie Shayne.

Self-help superstar Rachel de Luca and Detective Mason Brown have finally given in to their overwhelming attraction to each other, but neither of them is ready to let physical passion turn into full-blown romance. When a judge’s daughter disappears, Mason has a terrible sense that it’s connected to the most recent case they solved together. The discovery of a string of missing women—all young, all troubled—seems like a promising lead. But there’s no clear connection between the missing girls. He realizes that once again he’ll have to rely on his own well-honed instincts and Rachel’s uncanny capacity to see through people’s lies in order to catch a predator and rescue his captives. But can they do it before Rachel becomes his next victim?

Rachel de Luca has a bad feeling about the new woman in Detective Mason Brown’s life, the nurse taking care of him after he’s injured in the line of duty. She’d like to think it’s just jealousy, but intuition tells her it’s something more, maybe something dangerous. Mason knows Rachel’s wary of commitment, and asking her to stay when he’s in this condition would be the worst thing for their relationship. Then they receive chilling news: Mason’s psychotic sister-in-law has escaped from custody, and her sons—the nephews Mason is raising—are missing and the clock is ticking. As Mason and Rachel try to find the boys, she senses a new and unexpected danger stalking them. Soon, everyone close to Mason is in deadly peril—Rachel more than anyone….