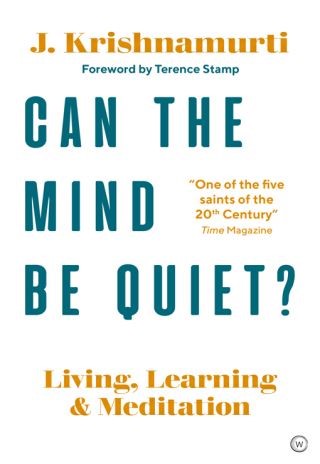 Can The Mind Be Quiet?

One of the greatest thinkers of the 20th century describes a series of his encounters around the world with a wide variety of spiritual seekers. Their questions and his answers explore the nature of the lived experience, the details of profound self-inquiry and how to live a fulfilled life.

These 60 chapters, with titles like "Solitude Means Freedom", "All Seeking is from Emptiness and Fear", and "Life is an Extraordinarily Beautiful Movement", carry the essence of Krishnamurti's teaching style and profoundest wisdom.

Each one reflects an encounter K had at different times during the sixties and seventies. It opens with a poetic account of the location where the encounter took place, plus occasionally a description of the seeker that K has met. The chapter then moves back and forth between the seeker and the teacher, giving the reader plenty to reflect upon.

This is previously unpublished material. Readers will be captivated by the luminous prose and the piercing insight. The style is enigmatic and poetical but each chapter contains more than enough for the reader to consider, perhaps as a daily practice. In the style of Paulo Coelho they have the quality of fables, but the teaching is far more profound and challenging.

Jiddu Krishnamurti: Jiddu Krishnamurti lived from 1895 to 1986, and is regarded as one of the greatest philosophical and spiritual figures of the twentieth century. He claimed no allegiance to any caste, nationality or religion and was bound by no tradition. For nearly sixty years he traveled the world and spoke spontaneously to large audiences until the end of his life in 1986 at the age of ninety.