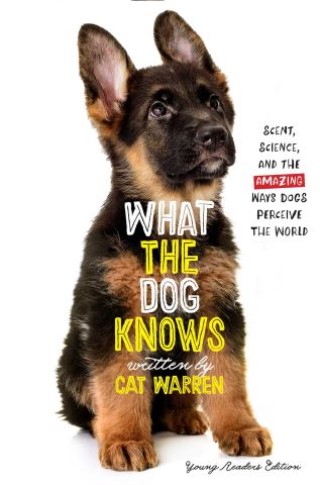 Scent, Science, and the Amazing Ways Dogs Perceive the World

In this young readers edition of the New York Times bestseller, Cat Warren and her canine companion, Solo, teach readers that the nose knows no bounds when it comes to working together, being persistent, and helping others.

Solo has a fine nose and knows how to use it, but he’s only one of many thousands of scent-detection dogs all over the United States. That’s a group that includes cadaver dogs, tracking, trailing, and apprehension dogs; dogs that can locate unmarked graves of Civil War soldiers; and even dogs that can find drowning victims more than two hundred feet below the surface of a lake.

All these dogs love to use their noses. They think their job is simply the best, most interesting game they’ve ever played! What good working dogs can do may seem magical or mysterious, but What the Dog Knows shows the science, the rigorous training, and the skilled handling that underlie these amazing abilities.

Cat Warren: Cat Warren is a professor at North Carolina State University, where she teaches science journalism, editing, and creative nonfiction courses. Before starting her academic career, Warren worked for newspapers across the United States, reporting on crime, poverty, and politics, from California to Wyoming to Connecticut. Warren started training her young German shepherd, Solo, as a cadaver dog in 2004. She and Solo were called to search for the missing across North Carolina for a number of years. She lives in downtown Durham, North Carolina, with her husband, David Auerbach, a retired professor of philosophy at North Carolina State University, and their two German shepherds. Visit CatWarren.com.Patricia J. Wynne is an artist, printmaker, and freelance scientific illustrator based in New York City. She works as a contract artist for scientists at research organizations around the world. Wynne has illustrated over 200 books for both adults and children, and her work has appeared in numerous publications, including The New York Times, The Wall Street Journal, Cricket, and Scientific American. Her books have received multiple awards, including a Theodore Seuss Geisel Honor for Hello, Bumblebee Bat (by Darrin Lunde). She studied printmaking at the University of Iowa and works at Robert Blackburn Printmaking Workshop in midtown New York City. Find out more at PatriciaWynne.com.