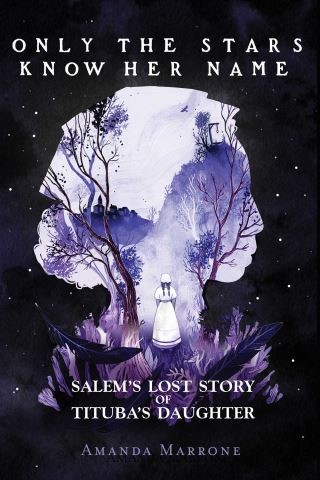 Only the Stars Know Her Name

False accusations and false confessions of witchcraft in Salem, Massachusetts, took her mother, Tituba, away from her. Now Violet seeks revenge on those who tore her family apart. Readers will be instantly transported back in time in this dark and gripping novel!

It's been a year since the Salem Witch Trials ended, and while the townspeople try their best to act like nothing happened, thirteen-year-old Violet simply can't, as everything she held dear was ripped away from her. Her mother, Tituba, was accused of witchcraft by Betty and Abigail Parris, two girls Violet had grown up with and regarded as sisters. And instead of denying those allegations, Tituba had confessed to the crimes. But why? Her mother would never have done the wicked acts she was charged with. Would she?

Once the remaining accused of witchcraft are pardoned, Violet inquires about her missing parents, only to learn that Reverend Parris has sold them to a man who took them north. Now filled with rage and wanting retribution, she comes across Tammy Younger and Elizabeth Prince, two girls who're also seeking vengeance amid all this turmoil. Together, the three form a coven, signing their names to the Devil's book, and they find solace in the newness and excitement of the magic they're practicing.

But once the magic grows darker and forges a destructive path through their community, will Violet achieve the closure she longs for, or will the darkness consume them all?

This historical, powerful story of family, revenge, and reconciling is a can't-miss novel from Amanda Marrone.

Amanda Marrone: Amanda Marrone grew up on Long Island reading, drawing, watching insects, and suffering from an overactive imagination. She earned a BA in education at SUNY Cortland and taught fifth and sixth grade. Amanda now lives in Shelton, Connecticut with her husband and two kids.