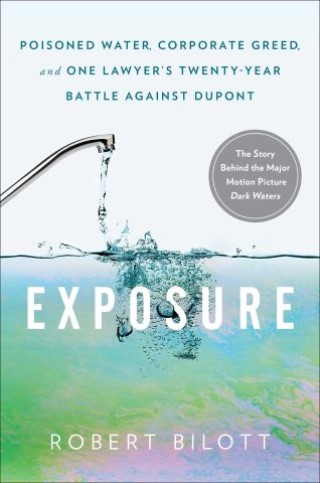 “For Erin Brockovich fans, a David vs. Goliath tale with a twist.” —The New York Times Book Review

In 1998, Rob Bilott began a legal battle against DuPont that would consume the next twenty years of his life, uncovering the worst case of environmental contamination in modern history and a corporate cover-up that put the health of hundreds of thousands of people at risk. Representing a single farmer who was convinced the creek on his property had been poisoned by runoff from a nearby DuPont landfill, Rob ultimately discovers the truth about PFAS—unregulated, toxic chemicals used in the manufacturing of Teflon and a host of other household goods. DuPont’s own scientists had issued internal warnings for years about the harmful effects of PFAS on human health, but the company continued to allow these chemicals to leach into public drinking water. Until Rob forced them to face the consequences.

Exposure is an unforgettable legal drama about malice and manipulation, the failings of environmental regulation, and one lawyer’s quest to expose the truth about this previously unknown—and still unregulated—chemical that presents one of the greatest human health crises of the 21st century.

Robert Bilott: Robert Bilott is a partner at the law firm Taft Stettinius & Hollister, LLP in Cincinnati, Ohio where he has practiced environmental law and litigation for more than twenty-eight years. He has been selected as one of the Best Lawyers in America for several years running and has received numerous honors for his work in environmental law and litigation. Rob is a former chair of the Cincinnati Bar Association’s Environmental Law Committee and a graduate of New College in Sarasota, Florida (BA) and the Ohio State University College of Law (JD, cum laude). In 2017, Rob received the international Right Livelihood Award, commonly known as the “Alternative Nobel Prize,” for his years of work on PFOA. Exposure: Poisoned Water, Corporate Greed, and One Lawyer’s Twenty-Year Battle against DuPont is his first book.