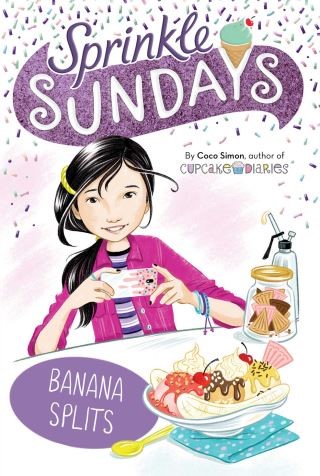 Tamiko slips up on social media in the eighth delicious book in the Sprinkle Sundays series from the author of the Cupcake Diaries series!

Tamiko makes a snarky comment on social media meant only for her friends to see, but she accidentally posts it on the Molly’s website and it goes viral! Even though she removes the comment almost immediately, people have already taken screenshots of it and she’s labeled as one of the mean girls at school. Can Tamiko say she’s sorry and make everything right again—with a cherry on top?

Coco Simon: From cupcakes to ice cream and donuts! Having written over thirty books about middle school girls and cupcakes and ice cream, Coco Simon decided it was time for a change; so she’s switched her focus from cupcakes to her third favorite sweet treat: donuts! When she’s not daydreaming about yummy snacks, Coco edits children’s books and has written close to one hundred books for children, tweens, and young adults, which is a lot less than the number of cupcakes, ice cream cones, and donuts she’s eaten. She is the author of the Cupcake Diaries, the Sprinkle Sundays, and the Donut Dreams series.