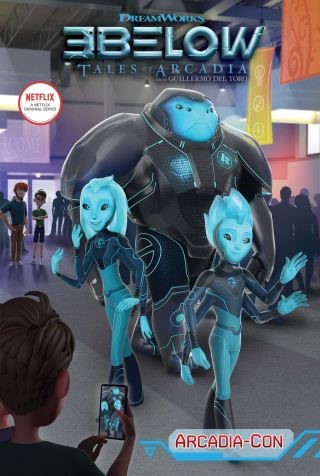 From the limitless imagination of acclaimed filmmaker Guillermo del Toro and DreamWorks Animation, get ready to meet a new cast of otherworldly characters in 3Below—the exciting, new Tales of Arcadia series, which picks up where Trollhunters left off.

For twins Aja and Krel being the new kids at school is hard. Honestly though, it’s high school. When isn’t there drama? But there may be a tad more drama than usual when you are teenage royals from another planet trying to blend in to the quiet little town of Arcadia Oaks, USA.

In this first adventure of the Tales of Arcadia: 3Below series, Aja and Krel grudgingly attend Arcadia’s annual sci-fi/pop culture convention (Arcadia Con) and discover it’s easy to hide in plain sight when everyone is wearing a costume! The aliens meet up with Eli, Steve, Toby, Jim, and Claire from the Trollhunters series, who come in handy when an alien bounty hunter arrives at the convention to collect the bounty on Aja and Krel. Suddenly, Arcadia Con isn’t just fun and games.

This book includes full-color glossy inserts with images from the show!

Richard Ashley Hamilton: Richard Ashley Hamilton is best known for his storytelling across DreamWorks Animation’s How to Train Your Dragon franchise, having written for the Emmy-nominated Dragons: Race to the Edge on Netflix and the official Dragons Expanded Universe bible. In his heart, Richard remains a lifelong comic book fan and has written and developed numerous titles, including Trollhunters (with Marc Guggenheim) for Dark Horse Comics and his original series Scoop for Insight Editions. Richard lives in Silver Lake, California, with his wife and their two sons.