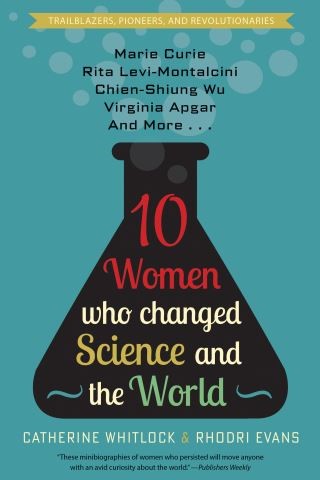 10 Women Who Changed Science and the World

Spanning the nineteenth and twentieth centuries, this fascinating history explores the lives and achievements of great women in science across the globe.

Ten Women Who Changed Science and the World tells the stories of trailblazing women who made a historic impact on physics, biology, chemistry, astronomy, and medicine. Included in this volume are famous figures, such as two-time Nobel Prize winner Marie Curie, as well as individuals whose names will be new to many, though their breakthroughs were no less remarkable.

These women overcame significant obstacles, discrimination, and personal tragedies in their pursuit of scientific advancement. They persevered in their research, whether creating life-saving drugs or expanding our knowledge of the cosmos. By daring to ask ‘How?’ and ‘Why?’, each of these women made a positive impact on the world we live in today.

In this book, you will learn about:

Astronomy
Henrietta Leavitt (United States, 1868–1921) discovered the period-luminosity relationship for Cepheid variable stars, which enabled us to measure the size of our galaxy and the universe.

Physics
Lise Meitner (Austria, 1878–1968) fled Nazi Germany in 1938, taking with her the experimental results which showed that she and Otto Hahn had split the nucleus and discovered nuclear fission.

Chien-Shiung Wu (United States, 1912–1997) demonstrated that the widely accepted ‘law of parity’, which stated that left-spinning and right-spinning subatomic particles would behave identically, was wrong.

Chemistry
Marie Curie (France, 1867–1934) became the only person in history to have won Nobel prizes in two different fields of science.

Dorothy Crowfoot Hodgkin (United Kingdom, 1910–1994) won the Nobel Prize for Chemistry in 1964 and pioneered the X-ray study of large molecules of biochemical importance.

Gertrude Elion (United States, 1918–1999) won the Nobel Prize for Physiology or Medicine in 1988 for her advances in drug development.