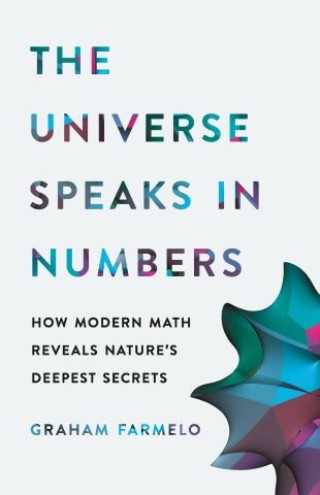 The Universe Speaks in Numbers

How math helps us solve the universe's deepest mysteries
One of the great insights of science is that the universe has an underlying order. The supreme goal of physicists is to understand this order through laws that describe the behavior of the most basic particles and the forces between them. For centuries, we have searched for these laws by studying the results of experiments.
Since the 1970s, however, experiments at the world's most powerful atom-smashers have offered few new clues. So some of the world's leading physicists have looked to a different source of insight: modern mathematics. These physicists are sometimes accused of doing 'fairy-tale physics', unrelated to the real world. But in The Universe Speaks in Numbers, award-winning science writer and biographer Farmelo argues that the physics they are doing is based squarely on the well-established principles of quantum theory and relativity, and part of a tradition dating back to Isaac Newton.
With unprecedented access to some of the world's greatest scientific minds, Farmelo offers a vivid, behind-the-scenes account of the blossoming relationship between mathematics and physics and the research that could revolutionize our understanding of reality.
A masterful account of the some of the most groundbreaking ideas in physics in the past four decades. The Universe Speaks in Numbers is essential reading for anyone interested in the quest to discover the fundamental laws of nature.