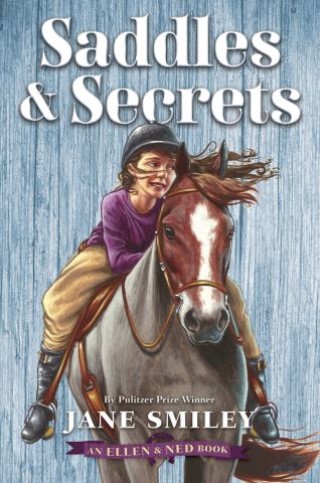 A young rider gets to know a new pony, adjusts to a new sibling, and learns a lot about secrets in this charming follow-up to Pulitzer Prize winner Jane Smiley's Riding Lessons.

Ellen can't stop thinking about the racehorse Ned--and the secret she shares with him. There seem to be a lot of secrets in Ellen's life these days. Secrets between friends. Secrets within families. Secrets that are all her own. And secrets her parents are keeping from her that could change everything about her life.

One thing that's not a secret is how much Ellen wants to jump--to feel herself on a horse as it soars through the air, smooth and fast. The horse she's riding these days is Hot Potato--a pony she can trust, a pony she can practice jumping with. But he can't possibly be as interesting as Ned, can he? And will her parents' secret take her away from the stable forever?

Jane Smiley: Jane Smiley is the author of numerous novels, including A Thousand Acres, which was awarded the Pulitzer Prize, and most recently, Golden Age, the concluding volume of The Last Hundred Years trilogy. She is also the author of five works of nonfiction and a series of books for young adults. A member of the American Academy of Arts and Letters, she has also received the PEN Center USA Lifetime Achievement Award for Literature. She lives in Northern California.