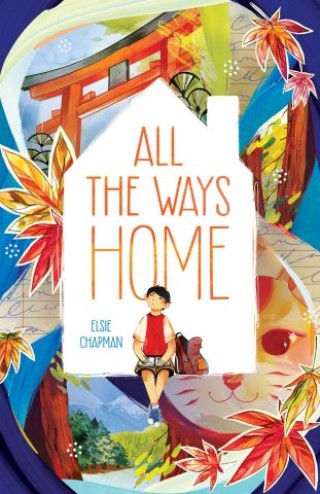 All the Ways Home

"In All the Ways Home, Elsie Chapman gracefully explores the complexities of family and loss. The specificity in which Chapman narrates Kaede's journey in Japan is particularly satisfying. An insightful, compassionate, and honest look at a young boy's search for identity and home after the death of his mother."—Veera Hiranandani, author of Newbery Honor novel The Night Diary

Sometimes, home isn’t where you expect to find it.

After losing his mom in a fatal car crash, Kaede Hirano--now living with a grandfather who is more stranger than family--developed anger issues and spent his last year of middle school acting out.

Best-friendless and critically in danger repeating the seventh grade, Kaede is given a summer assignment: write an essay about what home means to him, which will be even tougher now that he's on his way to Japan to reconnect with his estranged father and older half-brother. Still, if there's a chance Kaede can finally build a new family from an old one, he's willing to try. But building new relationships isn’t as easy as destroying his old ones, and one last desperate act will change the way Kaede sees everyone--including himself.

This is a book about what home means to us—and that there are many different correct answers.

Elsie Chapman: Elsie Chapman is the author of young adult dystopian series: Dualed and Divided (Random House) and the young adult novel Along the Indigo (Abrams), as well as the co-editor of Anthology of Asian Fantasy stories Legendary (Greenwillow). She is Chinese-Canadian, and lives in Japan with her husband. All the Ways Home is her middle grade debut.