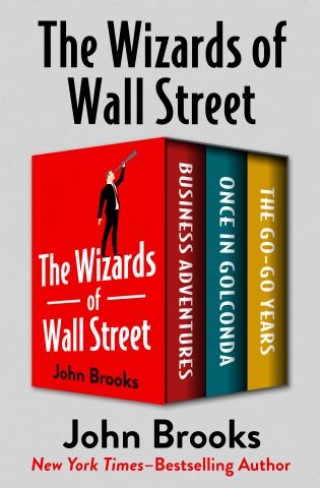 The Wizards of Wall Street

Business Adventures, Once in Golconda, and The Go-Go Years

A collection of true stories about money, the stock market, and high finance from the Gerald Loeb Award–winning “unbelievable business writer” (Bill Gates).

For decades, author and New Yorker staff writer John Brooks was renowned for his keen intelligence, in-depth knowledge, and uniquely engaging approach to the dramas and personalities of the financial and business worlds. With a style of prose that “turns potentially eye-glazing topics . . . into rollicking narratives,” Brooks proved that even the bottom line can be moving, hilarious, and infuriating all at once (Slate). Here are three of his most fascinating works, which still resonate today.

Business Adventures: This collection of entertaining short features is a brilliant example of Brooks’s talents, covering subjects such as the Edsel disaster, the rise of Xerox, and how corruption may be an irreparable part of the corporate world.

“Brooks’s deeper insights about business are just as relevant today as they were back then.” —Bill Gates, The Wall Street Journal

Once in Golconda: An incisively examined chronicle of the euphoric financial climb of the twenties, the ruinous stock market crash of 1929, and the unbelievable hardship and suffering that followed in its wake.

“Brooks is truly willing to give up his own views to get inside the mind of all his subjects.” —National Review

The Go-Go Years: A humorous look at the staggering “go-go” growth of the 1960s stock market and the ensuing crashes of the 1970s in which fortunes were made overnight and lost even faster.

“An unusually complex and thoughtful work of social history.” —The New York Times

John Brooks:
John Brooks (1920–1993) was an award-winning writer best known for his contributions to the New Yorker as a financial journalist. He was also the author of ten nonfiction books on business and finance, a number of which were critically acclaimed works examining Wall Street and the corporate world. His books Once inGolconda, The Go-Go Years, and Business Adventures have endured as classics. Although he is remembered primarily for his writings on financial topics, Brooks published three novels and wrote book reviews for Harper’s Magazine and the New York Times Book Review.