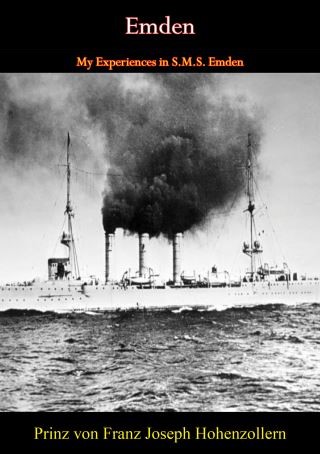 My Experiences in S.M.S. Emden

During World War I, Franz Joseph Prinz von Hohenzollern served in Germany’s Kaiserliche Marine (Imperial Navy) as the second torpedo officer on the light cruiser SMS Emden at the Battle of Cocos. The SMS Emden had an extraordinary record capturing British ships. This book, which was first published in its English translation in 1928, is a fascinating record of Franz Joseph’s naval service on the SMS Emden.

SMS Emden (“His Majesty’s Ship Emden”) was the second and final member of the Dresden class of light cruisers built for the Imperial German Navy (Kaiserliche Marine). Named after the town of Emden, she was laid down at the Kaiserliche Werft (Imperial Dockyard) in Danzig in 1906. Her hull was launched in May 1908, and completed in July 1909. She had one sister ship, Dresden. Like the preceding Königsberg-class cruisers, Emden was armed with ten 10.5 cm (4.1 in) guns and two torpedo tubes.

Emden spent the majority of her career overseas in the German East Asia Squadron, based in Tsingtao, in the Kiautschou Bay concession in China. In 1913, she came under the command of Karl von Müller, who would captain the ship during WWI. At the outbreak of hostilities, Emden captured a Russian steamer and converted her into the commerce raider Cormoran. Emden rejoined the East Asia Squadron, after which she was detached for independent raiding in the Indian Ocean. The cruiser spent nearly two months operating in the region and captured nearly two dozen ships. On October 28, 1914, Emden launched a surprise attack on Penang; in the resulting Battle of Penang, she sank the Russian cruiser Zhemchug and the French destroyer Mousquet.

The SMS Emden’s extraordinary record capturing British ships resulted in all those who served on her, including Franz Joseph, being given the right to add the ship’s name to the end of their surnames.