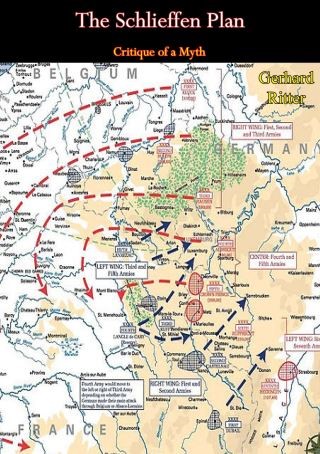 Critique of a Myth

The Schlieffen Plan was the name given after World War I to the theory behind the German invasion of France and Belgium on 4 August 1914. In 1905-1906 Field Marshal Alfred von Schlieffen, the Chief of the Imperial Army German General Staff from 1891-1906, had devised a deployment plan for a war-winning offensive, in a one-front war against the French Third Republic. After the war, the German official historians of the Reichsarchiv and other writers, described the plan as a blueprint for victory.

Post-war writing by senior German officers and the Reichsarchiv historians managed to establish a commonly accepted narrative that it was Schlieffen’s successor Helmuth von Moltke the Younger’s failure to follow the blueprint, rather than German strategic miscalculation, that resulted in four years of attrition warfare.

In 1953, renowned historian Prof. Gerhard Ritter Schlieffen’s unearthed Schlieffen’s papers during a visit to the United States, and he published his findings in the book Der Schlieffenplan: Kritik eines Mythos, presented here in its 1958 English translation, The Schlieffen Plan: Critique of a Myth. It proved to be an important historical publication, as it set in motion a period of revision, when the details of the supposed Schlieffen Plan were subjected to scrutiny and contextualisation.

In Der Schlieffen Plan, Prof. Ritter presents the full text of Schlieffen’s military testament, and the relevant parts of other memoranda which shed light on the evolution of the Plan. They are preceded by Professor Ritter’s masterly exposition of their content and significance, while his accompanying notes add to the illuminating effect.

“FOR two generations the Schlieffen Plan has been a magic phrase, embodying one of the chief mysteries and ‘might have beens’ of modern times. The mystery is cleared up and the great ‘If’ analysed in Gerhard Ritter’s book—a striking contribution to twentieth-century history.”—B. H. Liddell Hart

Gerhard Ritter: GERHARD GEORG BERNHARD RITTER (6 April 1888 - 1 July 1967) was a nationalist-conservative German historian and a professor of history at the University of Freiburg from 1925-1956.

Born in Bad Sooden-Allendorf, Germany, he studied at the Universities of Munich, Heidelberg, and Leipzig and began teaching in 1912. While studying at Heidelberg, Ritter was a research assistant to the national-liberal historian Hermann Oncken, who was a major influence on Ritter. A Lutheran, he first became well known for his 1925 biography of Martin Luther and hagiographic portrayal of Prussia.

He fought as an infantryman in WWI. A member of the German People’s Party during the Weimar Republic, he was a lifelong monarchist. Following WWII, Ritter worked to restore German nationalism by attempting to separate it from Nazi ideology.

SIR BASIL HENRY LIDDELL HART (31 October 1895 - 29 January 1970) was an English soldier, military historian and military theorist. Following WWII, he was a proponent of the West German rearmament and the moral rehabilitation of the German Wehrmacht. As part of these two interconnected initiatives, Liddell Hart significantly contributed to the creation of the Rommel myth. He is the author of a series of histories of major military figures, including Great Captains Unveiled (1927) and Sherman: Soldier, Realist, American (1929), and edited The Rommel Papers (1953). He was made a Knight Bachelor in the Queen’s New Year Honours of 1966. He died in 1970 at the age of 74.