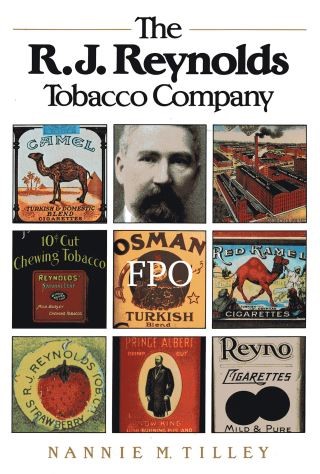 In this corporate history of the R. J. Reynolds Tobacco Company, Nannie M. Tilley recounts the story of Richard Joshua Reynolds and the vast R. J. Reynolds tobacco complex with precision and drama.

Reynolds's rise in the tobacco industry began in 1891 when he introduced saccharin as an ingredient in chewing tobacco. Forced into James B. Duke's American Tobacco Company in 1899, the Reynolds company became the agency for consolidating the flat plug industry. In 1907, as the government began its antitrust suit against Duke, Reynolds himself bucked the trust and introduced another bestseller: Prince Albert smoking tobacco. The government won its suit in 1911; Duke's Tobacco Combination was dissolved, and Reynolds, left with a free and independent company, a much larger plant, and improved machinery, immediately began an expansion program.

In 1913 Reynolds introduced Camels, a blend of Burley and flue-cured tobacco with some Turkish leaf. Perhaps the best-known cigarette ever produced, Camels swept the market and generally led the way until the development of filter-tipped cigarettes in the 1950s.

Other important Reynolds advances include the systematic purchase and storage of leaf tobacco, the development of a stemming machine, the adoption of cellophane for wrapping cigarettes, and the production of cigarette paper. For its employees, the company established a medical department, introduced lunch rooms and day nurseries, and installed group life insurance. Perhaps more important than any of these items was the development of reconstituted leaf, a method of combining scrap tobacco and stems into a fine elastic leaf entirely suitable for use in any tobacco product. This achievement represented a savings of 25 percent in the cost of leaf and was followed by the development of the filter-tipped Winstons and Salems.

The R. J. Reynolds Tobacco Company includes absorbing accounts of the company's steady technological progress, its labor problems and advances, and its influential role in North Carolina and in the industry through 1962.