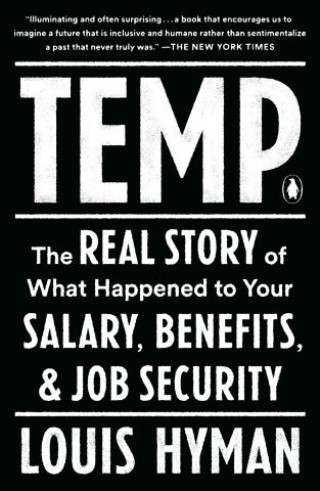 The Real Story of What Happened to Your Salary, Benefits, and Job Security

The untold history of the surprising origins of the "gig economy"--how deliberate decisions made by consultants and CEOs in the 50s and 60s upended the stability of the workplace and the lives of millions of working men and women in postwar America.

Over the last fifty years, job security has cratered as the institutions that insulated us from volatility have been swept aside by a fervent belief in the market. Now every working person in America today asks the same question: how secure is my job? In Temp, Louis Hyman explains how we got to this precarious position and traces the real origins of the gig economy: it was created not by accident, but by choice through a series of deliberate decisions by consultants and CEOs--long before the digital revolution.

Uber is not the cause of insecurity and inequality in our country, and neither is the rest of the gig economy. The answer to our growing problems goes deeper than apps, further back than outsourcing and downsizing, and contests the most essential assumptions we have about how our businesses should work. As we make choices about the future, we need to understand our past.

Louis Hyman: Louis Hyman is an associate professor of economic history at the Industrial Labor Relations School of Cornell University, as well as the director of ILR's Institute for Workplace Studies in New York City. A former Fulbright scholar and McKinsey consultant, Hyman received his PhD in American history from Harvard University. His writing has appeared in The New York Times, The Atlantic, Slate, Bloomberg, Pacific Standard, Wilson Quarterly and elsewhere. He is the author of Debtor Nation: The History of America in Red Ink and Borrow: The American Way of Debt.