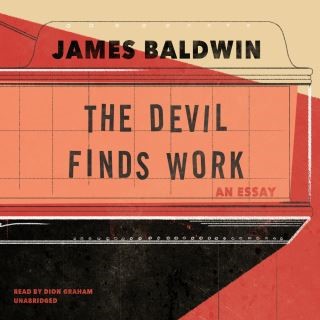 Baldwin's personal reflections on movies gathered here in a book-length essay are also a probing appraisal of American racial politics.Offering an incisive look at racism in American movies and a vision of America's self-delusions and deceptions, Baldwin challenges the underlying assumptions in such films as In the Heat of the Night, Guess Who's Coming to Dinner, and The Exorcist.Here are our loves and hates, biases and cruelties, fears and ignorance reflected by the films that have entertained us and shaped our consciousness. And here too is the stunning prose of a writer whose passion never diminished his struggle for equality, justice, and social change.

James Baldwin (1924-1987) was educated in New York. His first novel, Go Tell It on the Mountain, received excellent reviews and was immediately recognized as establishing a profound and permanent new voice in American letters. The appearance of The Fire Next Time in 1963, just as the civil rights movement was exploding across the American South, galvanized the nation and continues to reverberate as perhaps the most prophetic and defining statement ever written of the continuing costs of Americans' refusal to face their own history. It became a national bestseller, and Baldwin was featured on the cover of Time. The next year, he was made a member of the National Institute of Arts and Letters and collaborated with the photographer Richard Avedon on Nothing Personal, a series of portraits of America intended as a eulogy for the slain Medger Evers. His other collaborations include A Rap on Race with Margaret Mead and A Dialogue with the poet-activist Nikki Giovanni. He also adapted Alex Haley's The Autobiography of Malcolm X into One Day When I Was Lost. He was made a commander of the French Legion of Honor a year before his death, one honor among many he achieved in his life.

Dion Graham, from HBO's The Wire, also narrates The First 48 on A&E. Winner of dozens of Earphones Awards and the prestigious Audie Award for best narration, he has performed on Broadway, off Broadway, internationally, in films, and in several hit television series. His performances have been praised as thoughtful and compelling, vivid and full of life.